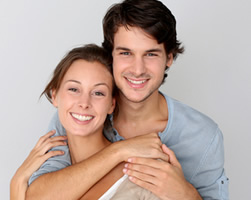 We offer a variety of andrology services for male infertility including the following.

The semen analysis is an essential part of any fertility evaluation. A male factor component is found in approximately 40% of couples who are having difficulty conceiving. A sperm sample is obtained from the male partner and analyzed in our andrology lab. It is recommended that the male have 3-4 days of sexual abstinence, but no more than 7 days, before he produces the sample. We have facilities in our office for the male to collect the specimen. Sperm samples can sometimes be collected at home, depending on how far away you live, and brought in to our office for analysis.

Shortly after the sample is collected it will be analyzed. The following parameters in the ejaculate will be measured: volume, pH, concentration of sperm, percent of sperm that are motile, total number of motile sperm in the ejaculate and sperm morphology (shape). If the semen analysis is abnormal, we will usually recommend that test be repeated in approximately 4 weeks. The results of the semen analysis will be discussed with you by your doctor at a follow-up visit.

Sperm can be cryopreserved (frozen) and stored for later use. There are several situations in which a man may wish to freeze his sperm. Prior to chemotherapy or radiation treatment for cancer, some men may elect to store their sperm as a back-up in the event their cancer treatment results in damage to the sperm producing part of their testicles. Sperm may also be frozen prior to a man undergoing a vasectomy. Men who are going to be absent for prolonged periods of time, such as extended military duty, may freeze their sperm for use by their wife during their absence. If a man anticipates difficulty in producing a sperm sample for an IVF cycle, he may elect to freeze a sample for use in the event he is unable to produce one on the day of the egg retrieval.

We will usually request that the man produce multiple sperm samples over the course of several weeks for cryopreservation. The sperm samples will be frozen and stored in our andrology lab until they are needed. It is not known how long sperm can be frozen and still be viable when thawed. We do not have a strict time limit on the duration we will keep sperm frozen. There is, however, a yearly fee for storage of the sperm.

Sperm antibody testing (immunobead test) is done selectively on men who are at increased risk for having sperm antibodies. Antibodies that are attached to the sperm can impair sperm motility. They also can impair the ability of sperm to penetrate and fertilize an egg. Antibodies are most commonly found in men who have had a vasectomy reversal. They can also be found in men who have had testicular trauma, surgery or infections.

The test for sperm antibodies requires the man to produce a semen sample as is done for a routine semen analysis. The andrology lab will then perform the specialized testing to determine if antibodies are present on the sperm. The immunobead test will determine which type of antibody is present and where on the sperm they are attached. The sperm antibody test is performed on the 2nd Tuesday of each month in our lab.

Surgical retrieval of sperm from the epididymis or testicle can sometimes be performed in men who have no sperm in their ejaculate (azospermia). Obstruction in the male reproductive tract is a common cause of azospermia. The most common causes of obstructive azospermia include the following: prior vasectomy, congenital absence of the vas deferens, infection and trauma. These men produce sperm, but due to the blockage, no sperm are found in the ejaculate. Sperm can usually be retrieved by aspiration of the epididymis or the testicle. The aspiration procedure is performed by a urologist under local anesthesia in the office. The quantity and quality of the sperm are such that IVF with intra-cytoplasmic sperm injection (ICSI) is necessary to achieve a pregnancy. It should be noted that men with congenital absence of the vas deferens are usually genetic carriers for the disease cystic fibrosis. They are at risk for producing offspring with the full cystic fibrosis disease. It is recommended that the female partner of these men be screened for the cystic fibrosis carrier state.